Anthony Rae for FOE 11th May 2015:  Before last Thursday’s general election campaigners from Calderdale and Kirklees local FOE groups approached all the candidates standing in 5 parliamentary constituencies and asked them whether they would support the three pledges already endorsed by the leaders of the Conservative, Labour and Liberal Democrat parties. And we told them that, after the election, we would be coming to Parliament on Wednesday 17th June to ask whoever was the elected MP to fulfil those pledges.

So what did the MPs who won tell us?:

Dewsbury: Paula Sherriff MP – supports [? – we think so, but as yet there’s been no formal response]

This response demonstrates the merits of asking both the party leaders and all candidates about the pledges before the election. Already the Climate Coalition and Friends of the Earth nationally are asking the new Prime Minister David Cameron to keep his promise.

In addition the Calderdale climate change partnership Calderdale’s Energy Future also prepared a local pledge, which we’ll be asking our two MPs to work together to deliver across the district:

The government to proactively support local initiatives and activity to assist Calderdale to achieve its 2020 carbon reduction target, and in particular a large-scale programme of residential and commercial energy efficiency measures – which will also reduce fuel poverty and pressures on the NHS, and create employment – and measures which will boost the success and competitiveness of Calderdale’s low carbon businesses 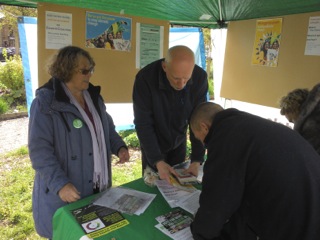 And finally we’ve started to collect individual messages – from people, businesses and organisations – to take with us down to London on 17th June to present to our MPs. At Alternatiba in Todmorden on 3rd May we collected around 100 and we want many more. Download our Messages document here and an information sheet about this campaign here.

The  next task is to organise our trip to the Parliamentary Lobby, so if you’re interested in going or just sending a climate & energy Message to your MP  contact Anthony Rae ar@anthonyrae.com tel 01422 845061 text 07943 320041 And you can read all about the 17th June event in this document.

Fortunately the new Secretary of State for Energy and Climate Change is a Conservative politician Amber Rudd MP who is not a scarcely concealed climate change sceptic and has already promised to take action in support of the Climate Change Act – as  you can read here and here. And that was followed by the appointment of Greg Clark as Secretary of State for Communities and Local Government (to replace Eric Pickles), who was David Cameron’s shadow Climate Secretary before entering government on 2010; and the reappointment of Liz Truss at Environment. This trio of Secretaries of State offers a quite different opportunity to advance an agenda of a more proactive response to climate and energy across the the life of the next parliament to 2020 than was forseeable 12 months ago.