Anthony Rae for FOE 27th December 2015: On 12th December Hebden Bridge was ‘inches away from flooding disaster’, says the article I wrote then. Of course the ‘flood next time’ was always likely to happen – and so it came to pass just two weeks later, on Boxing Day, a visitation on all the towns along the Calder Valley – but was there, is there any more that could be done to respond to its underlying causes? ‘Now’s not the time to deal with the politics of all this’ said my colleague as we surveyed the ferocious power of the river surging through our town. I disagree.

After years of slogging away Calderdale Friends of the Earth finally secured a climate change strategy for Calderdale, approved by the Council in 2012. Its objective: a 40% carbon reduction target by 2020. We did so for a number of reasons: yes, climate change is a global threat, on a massive scale; but we also understood its local dimension – not just the need for our area to join in the national effort to bring down CO2 emissions but also because the climate science told us that the more extreme weather events predicted would exacerbate the previous history of flooding in the upper Calder Valley.

Your constituency. And we knew time was running out, and that there was an absolute urgency to undertake every conceivable measure – to reduce climate risk, and thus flood risk. But when all the partners in that strategy – public, private and community sectors, working together – tried to actually implement its action plan they hit a problem. The majority Conservative government – your government – wasn’t the slightest bit interested in assisting local carbon reduction; indeed, they set about making it more difficult. And after the 2015 general election that’s got even worse.

Take our homes for example, of which many hundred were yesterday inundated with several feet of water. They are responsible for a quarter of all UK emissions, so programmes to make them more energy efficient have to be a priority for government. But were they? Existing homes?: first there was the ‘Green Deal’, which obviously wasn’t going to work, and then this summer was cancelled but with no announced replacement. Not quite damaging enough?: so in November 2015, there were even more cuts to ECO, ‘the UK’s most important energy-efficiency programme, which was created to help the poorest homeowners’. That’ll save £30 a year off energy bills; bound to be worth it.  New homes?: Why not remove the long planned requirement for increased residential energy efficiency, at exactly the same time as the government requires millions more houses to be built, so that for decades to come there’ll be higher emissions and higher bills? What a great idea!

Then just a few weeks ago the government announced its planned reductions to feed-in-tariffs for renewable energy schemes, which will now be cut by only 64% rather than the original 87%. ‘My priority – said the Minister – ‘is to ensure energy bills for hardworking families and businesses are kept as low as possible’  Sounds like good value for money again, and a decision by the way that came just four days after the announcement that ours is ‘A country more flood resilient’.

Recognising this crippling disconnection between national and local efforts, Friends of the Earth put in months of work in spring 2015 – again with the Council, businesses and communities across Calderdale – to organise Calderdale’s participation in the national lobby of Parliament about climate change on 17th June. Together we all drew up a comprehensive programme called  How we can take action together around energy, climate change and green growth. And it included flooding, asking for help in securing the funding for Calderdale’s £15 million flooding mitigation programme, and ‘a commitment from Government Agencies with responsibility for the management of upland areas to make appropriate water containment, drainage and run-off arrangements’.

The intention was to present this to both the district’s MPs at the June lobby so that together you could work with government to try and deal with the many implementation difficulties we were encountering locally. But, as the MP of the government party, your participation in this initiative was going to be crucial. So your decision on the day before the lobby to snub the Calderdale delegation – despite the fact that you promised you would meet it – with no explanation, no apology, scuppered all those efforts. Thus Calderdale’s climate partnership never got to talk to you about all our climate and energy problems and opportunities, and the need for more concerted action against flooding. 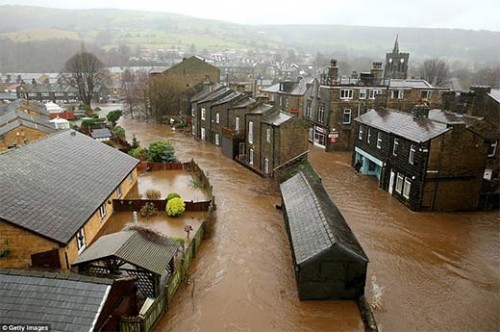 Although it’s not that you don’t find time to do some things in connection with renewable energy. Like objecting to planning applications for wind turbines, large and small. Or lobbying the government to cut the subsidies for wind energy even more than they planned. Of course the public relations aspect of this needs careful managing. Like meeting up in November with Elland company Waxman Energy (‘national solar PV Distribution Company and solar system design specialist’, who were obviously concerned with the proposed reductions in solar subsidy) so as to imply that you are concerned about this, although you don’t actually say you intend to do anything. Or tweeting in support of Riverside School in Hebden Bridge hoping to win some solar panels from the M&S energy fund. They didn’t, and on Saturday the school was also under several feet of water.

And then finally at 7am on Boxing Day morning maybe you actually believed that a few tweets were all the action you were meant to take against the flooding threat. Of course you needed to be working away years beforehand. But when local campaigners drew attention to the possible connection between management practices on the moorland estates above Hebden Bridge affecting the ability of the peat bogs to retain and slow the release of rainfall pouring down into the valley, what happened? Natural England were told to back off. In Hebden Bridge, Calder Future – the district’s river partnership which I chair – has been waiting for a year to receive and act on the results of the Environment Agency’s computer modelling, which would point to what needed to be done to protect the town. I suspect EA budget reductions are partly responsible for the delay, and the Calderdale Flood Pathfinder was wound up in March when the government money stopped. We need decisive action that links together what happens ‘on the tops’ to what then occurs – disastrously – in the valley bottom.

What does this tell us, and what ought it to tell you? All the risks of climate change were obvious, for all to see and understand, even before the dreadful local floods of 2012. So surely what the Calder Valley constituency in particular needed was an MP who, from the very first day they were elected, made every conceivable effort to reduce those risks: by demanding action to tackle climate change; by actively supporting local carbon reduction and making sure it happened; by promoting clean renewable energy; by chasing and resourcing the plans to build up our flooding resilience. And do all this visibly, and proactively.

But you didn’t do that. In fact you’ve done the opposite. You failed to help the local Climate Change Partnership, so it’s almost certain now that Calderdale won’t achieve its 40% carbon reduction target. You’ve worked actively to undermine renewable energy schemes. You don’t seem to be aware of the need to act on the interconnection between moorland management and valley flooding. And, despite appearances, you’ve supported the government actions before and since the general election to erode and discourage almost every local scheme and incentive to tackle climate change.

Now I suppose you could argue that, even if you’d done everything possible, the floods would still have occurred. ‘Where’s the connection?’ Maybe – but at least your constituents would have known that you were on their side, doing all you could, rather than working insidiously against their interests and their future. But then again maybe understanding the connections between things – between actions in the past and now, and events in the future – is what it’s all about. Maybe you do see the connection but something else gets in the way.

So this is not just a complaint about inaction. It seems the Calder Valley – your constituency – has been sacrificed to a combination of political indifference and political ideology. Hundreds and hundreds of homes and businesses and people’s lives, the local economies of all the valley towns, have been terribly damaged. They needed you, their MP, to be working tirelessly to protect them against a most basic threat, by sustained and positive political action, and you let them down.

And what of the future, our future? Will you change your political approach to climate, energy and flood resilience now? Or will it just be a speech in the House of Commons, a visit to the affected communities with a government minister, and that’s it? – back to political ‘business as usual’. You may want to act as if there’s nothing you need do any different. The purpose of this ‘open letter’ is to remove that alibi because, as we’ve seen, there’s so much you could have done in the past and can do in the future.

Or do you intend that the Calder Valley – your constituency – is to be left to the mercy of the next big flood, and without the determined carbon reduction, clean energy, warm homes and flood resilience programme that people actually want? Maybe you could tell us, even if it’s just a little bit too late?

2 thoughts on “Calder Valley under water: Sacrificed to indifference and political ideology”