Summer 2014 One of the responses to reduce the risk of flooding following the devastating events in the Upper Calder Valley in 2012 is a ‘river stewardship’ programme to remove vegetation and debris from the riverbanks. This is part of a wider ‘pathfinder’ programme which has been funded by DEFRA with a £310,000 grant to March 2015; you can read about it here.

Environment Agency computer modelling has demonstrated that in particular locations (in this case Mytholmroyd) this is much more effective at reducing flood risk than dredging the river, because the large quantities of vegetation that grow during the summer would impede its flow and increase its height. Find out more about this here. 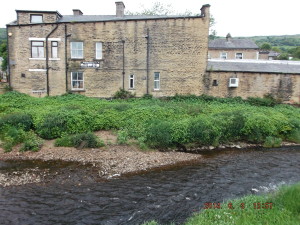 Calder Future – Calderdale’s river partnership, active since 1998 – has been commissioned by the Environment Agency and Calderdale Council to organise the ongoing river stewardship programme. So far five events have been held this year, with volunteers from the local community and further afield. 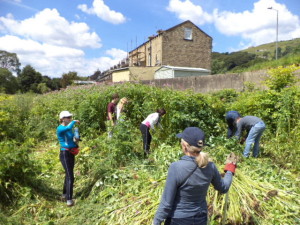 Anthony Rae, for Calder Future said: ‘I think this programme – new to us, and the area – has got off to a great start. At the moment we’re focussed on Mytholmroyd because we have the EA modelling work for that location; that for Hebden Bridge will be available soon. We’ve had two work parties of local volunteers on 30th March and 9th July, including pupils from Calder High School – and joined for the second event by members of the ‘green team’ from local firm Thomson Reuters – clearing vegetation from a shoal on the Calder opposite the Co-op garage. And we now have the advice and assistance of a really expert local volunteer Roger Barr who’s been undertaking this sort of essential clearance work on his own initiative for the last 30 years!”

”Then we’ve been particularly pleased to welcome a total of four volunteer teams from Lloyds Banking Group (which includes Halifax Bank) as part of their ‘day to make a difference’ initiative and, as I hope is now very visible now, they’ve certainly made a difference in Mytholmroyd in terms of the sheer quantity of vegetation they’ve cleared from the riverbanks in the centre of the town.

Their first group on 3rd June had 15 volunteers and started on the sites next to the Church where the channel narrows; their second on 11 July was even larger, with 30 volunteers pitching into jungles of Himalayan Balsam up to 8 feet tall, mixed in with brambles and nettles; and their third on 12th August, 20 strong, almost finished the task in the town centre by clearing a very large area just upstream. (N.B the vegetation still left in the LH picture below is Japanese Knotweed; that will be dealt with later).

Finally the fourth group on 1st October cleared the last stretch of Mytholmroyd town centre riverback (RH picture below) in the morning before going on to Nutclough Woods, Hebden Bridge in the afternoon to shift loads of timber, including some big logs and tree stumps, above the flood line and out of harm’s way in the bottom gulley. A great way to end the Lloyds ‘day to make a difference’  contribution to this year’s river stewardship programme. Thank you! 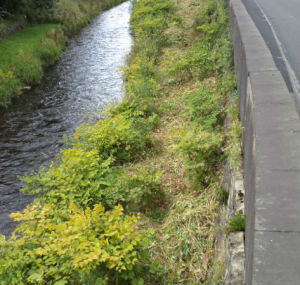 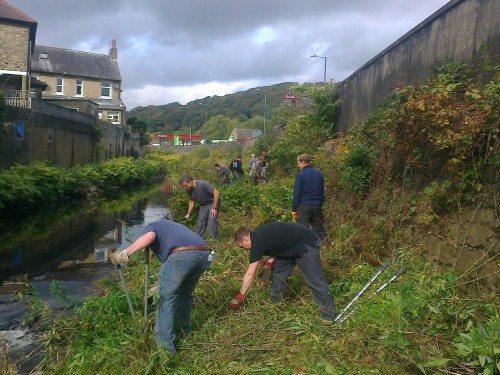 And you can certainly see the difference the volunteers have made if you compare the Before and After photographs for a site. By removing the vegetation the Environment Agency modelling indicates that, should another potential flood event occur tomorrow, the river channel will be less obstructed, thus less likely to over-top. 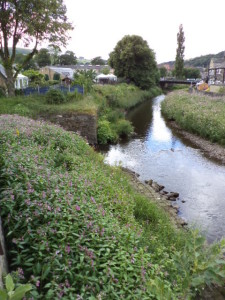 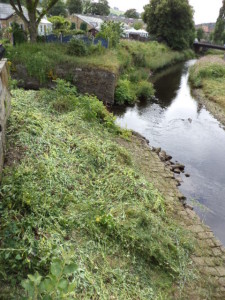 They also started to clear the stone walls in the town centre of saplings that can take root and create bigger problems in the future. 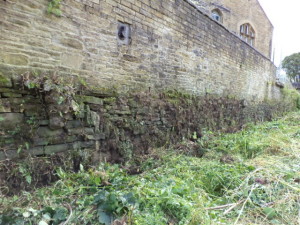 Here are two of the three large teams from Lloyds Banking Group who did all the hard work. Thanks very much – you were fantastic! They certainly demonstrated the importance of operating at scale, and with good team work. Thanks also to Thomson Reuter, Calder High School and our community volunteers and EA colleagues. 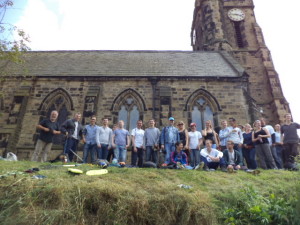 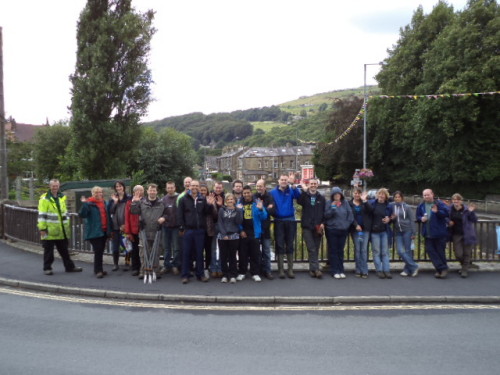 “We’ll have to judge the success of this first river stewardship programme by its ability to remove what has turned out to be very large amounts of vegetation growing on a riverbank that stretches for hundreds of yards, and to attract the involvement of volunteers to do this work, rather than e.g using paid labour or machines. We’ve also done a trial of strimming the balsam (on sites where that’s suitable) and this year’s effort by volunteers – which have left the clumps of Japanese Knotweed exposed for subsequent treatment by the Environment Agency – should allow us to get the right and most cost-effective balance between people and machines in future programmes.

If you’d like to find out more just contact Gavin Roberts, the Calder Future volunteers coordinator text 0777 231 8566 gavin@calderfuture.org.uk And to undertake other sorts of environmental volunteering throughout Calderdale check the opportunities on these pages and look for the volunteering opportunities colour-coded in purple on the Green Calderdale events diary here