12 October 2014 Anthony Rae for FOE:  On Tuesday I attended Calderdale’s Planning Committee to speak in favour of the four turbine Gorpley windfarm near Todmorden. The project developer is Kelda (the parent of Yorkshire Water) and you can access the documents and comments on the application here.

It was a revised version of the scheme, after the original five turbine proposal had been refused by planning officers without even consideration by the committee, and this time FOE had asked ward councillors to request that it be determined in public so that the arguments for and against could be presented more visibly.

To no avail. The officers, for the second time, recommended refusal. Only one councillor spoke briefly, supporting that recommendation because he thought of turbines destroyed wildlife and were hideously ugly. The other five members of the committee remained silent and then voted unanimously to reject the application. The front page of this week’s Todmorden News shouts out: ‘Victory!’

Just to be clear, as I said to the committee, whilst in general Friends of the Earth supports the provision of renewable energy we always review each major application on its merits. If the impacts at Gorpley had been unacceptable we would not have supported approval. With new turbines measuring up to 125 metres to tip we always need to be sensitive to the visual impacts of these very large structures in our moorland landscape, and to people’s reaction to that impact.
(photo courtesy Todmorden News)

But our very detailed analysis of the scheme, and the arguments put forward by the Council in opposition to it, showed us that i) those arguments were substantially flawed, such as to make a refusal unsound, and ii) that the scheme would also not cause significant or adverse visual or landscape impacts. So why refuse it?

To judge these issues you need to understand that around the Gorpley site, and then further away, are a number of other windfarms – the nearest being Reaps Moss, Todmorden Moor and Crook Hill – that had previously been objected to either by Calderdale or other local authorities but which were then subsequently approved variously by planning appeals inspectors, the government or the courts. These higher authorities had therefore already concluded in each case that the visual and landscape impacts in those locations were acceptable. So it seems that Calderdale had decided to continue that argument, but to win it in relation to the Gorpley scheme they would have to demonstrate new, additional and significant significant adverse impacts. Did they do so?

The Council position was that this four turbine development would either create a ‘windfarm landscape’ or that it would ‘tip the balance’ towards that landscape; and the landscape and visual impacts would indeed be significant and adverse. FOE said, on the contrary, that a ‘windfarm landscape’, to the extent that it exists at all, had already been created by the previous decisions; that Gorpley could not be seen as a new or additional impact because it was so close to Reaps Moss that it would just be ‘read’ as part of an existing, approved windfarm, as the evidence of the Viewpoints in the Environmental Statement clearly demonstrates; and that the Council’s ‘windfarm landscape’ concept did not stand up to scrutiny: for example three of the sites in this ‘landscape’ are around 10 km from Gorpley; two more are 15 and 17 km distant. 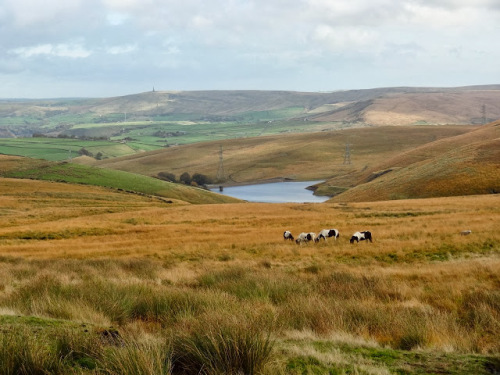 The Gorpley site looking towards Stoodley Pike; in the opposite direction the Gorpley turbines would merge with those in the Reaps Moss scheme, already approved

The officer’s report contained other dubious statements: for example that inserting Gorpley alongside the three nearby windfarms would link them ‘in such a way as to form a 7km long line of turbines that would appear almost unbroken from many viewpoints”. This is simply not true.

FOE concluded that in reality the four Gorpley turbines are a marginal addition to a much larger number of turbines most already consented and spread over an extremely large area which cannot possibly be read, viewed or interpreted as a single landscape. Actually by clustering a number of windfarms in this one area of Calderdale (and adjacent authorities) the previous consents have actually prevented the creation of a ‘windfarm landscape’ elsewhere in Calderdale.

What is particularly disappointing is that the council report chose to align itself with the April 2014 statement of Communities Secretary Eric Pickles “that the need for renewable energy does not automatically override environmental protections”, which is code for what has recently been identified as ‘unprecedented interference’ in wind farm projects. According to RenewableUK, Pickles has since June 2013 called-in 45 schemes which were at the appeal stage for his own determination, totalling 448 megawatts. Our interpretation of the position set out in Calderdale Council’s Gorpley assessment is that it could be deployed against windfarm applications anywhere in the district, precluding further megawatt-scale increases in renewable energy capacity. The implications of this are considerable.

The other argument Friends of the Earth put forward was that the Gorpley scheme would make a very significant contribution to reducing Calderdale’s CO2 emissions: it would remove some 15,500 tonnes CO2 – or around 40% of one year’s reduction – towards Calderdale’s challenging target of a 40% reduction in carbon emissions by 2020, which requires an additional reduction every year of around 40,000 tonnes CO2. This is much more than the ‘useful contribution’ the officers’ report talks about, and at the moment we’re not on course to meet that target.

What the report didn’t do, as neither did the local objectors , is make the connection between this local attempt to remove carbon emissions and the related reduction in flood risk in the Upper Calder Valley devastated by the extreme weather events of 2012, or the 2013 floods at Walsden just below the Gorpley site (video here).

Obviously the irony of this connection, and their ‘victory’, escaped them. Much more concerning is that Calderdale Council is prepared to deploy inadequate or fallacious arguments against renewable energy schemes at the same time as it’s trying to stem the flooding consequences of climate change, and it’s a partner in the Calderdale’s Energy Future initiative trying to help it implement its own carbon reduction strategy. Clearly some important connections are not being made or understood.